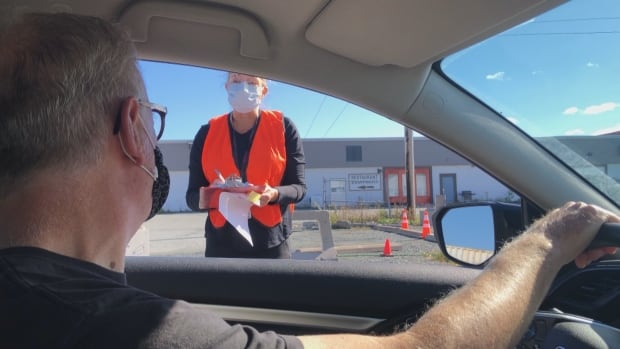 The Nova Scotia Health Authority is taking a jab at drive-thru blood testing and so far the experiment is being well-received.

“It’s like working at Disney. People are happy, they’re thanking us, and they’re so appreciative that they don’t have to leave their vehicle,” said Trudy Handy, a manager with the authority’s central zone.

“It is the most positive experience that I’ve had during all of this pandemic activity.”

The drive-thru clinic has operated on six Saturdays since August in the parking lot of the Dartmouth General Hospital.

Staff volunteer to take shifts on the weekend.

People must make appointments in advance to use the service. Appointments are set for every 10 minutes, allowing technicians to draw blood from 60 to 80 patients per day — faster than at a walk-in clinic.

“Once we get the process all nailed down and we’ve got everything working as smoothly as possible, it should be faster going through the drive-thru versus coming into our clinics,” said Shauna Thompson, senior director of laboratory services at the health authority.

The time savings arises because during COVID-19, disinfecting the blood-collection chair between patients takes between five and 10 minutes.

Thompson says that precaution isn’t necessary when patients are isolated in their own cars.

Thompson says  people with mobility issues can remain seated throughout and nobody has to pay for parking.

“One surprising comment that’s come out from a number of folks is that they’ve said it’s the best blood collection they’ve ever had,” Thompson said.

“When you roll down your car window, it’s actually a really good position for the arm to be in. It minimizes any kind of pinching that you might feel with a needle going in.”

Thompson says the drive-thru blood clinic is currently housed in a tent, and won’t be able to function in cold or stormy weather.

“The idea is right now not to go and build a new structure. The cost associated with that would be huge,” Thompson said.

“We’re hoping that there is capacity and existing facilities around HRM and in other parts of the province… It’s a fairly easy setup once you meet the basic criteria. We’re pretty mobile,” she said.