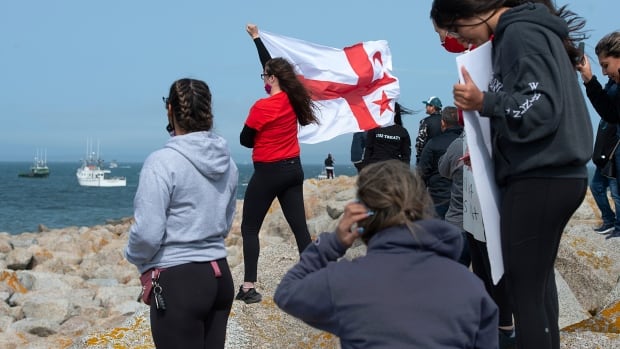 The Trudeau government will announce conditions for the authorization of moderate livelihood fisheries Thursday, including the expectation that those fisheries take place within existing commercial seasons, CBC News has learned.

The position aligns with demands from commercial lobster fishermen and processors in Nova Scotia who argue the Indigenous moderate livelihood fisheries that launched last year outside of the regulated season were unfair and irresponsible from a conservation perspective.

The Assembly of Nova Scotia Mi’kmaw Chiefs did not respond to a request for comment, but Mi’kmaw leaders and some academics have insisted the moderate livelihood fishery poses no risk to stocks because it is too small.

“We’ve been working on three major pillars: in-season fishing only, no increased effort and the same rules basically for all people fishing,” said Gordon Beaton, a commercial fisherman and president of the local Maritime Fishermen’s Union.

“That seems to be the marching orders we’re getting from the more local Fisheries Department people. If those are upheld, I’m sure that some minor details can be worked out with the commercial fishery and the First Nations.”

The office of Fisheries and Oceans Minister Bernadette Jordan declined to comment in detail on DFO’s position until it is released Thursday, except to say the decision is based on conservation.

“Nothing is mandatory, it’s an option to have moderate livelihood licences this season,” said press secretary Jane Deeks.

The department is offering Indigenous fishermen in Nova Scotia a pathway to sell lobster harvested in a moderate livelihood fishery. Right now, that catch does not have DFO’s stamp of approval.

Under provincial rules, only fish products harvested under federal commercial licences can be purchased by shore processors.

Last month, the Sipekne’katik and Potlotek First Nations launched lawsuits against the Nova Scotia government, arguing its regulations interfere with their treaty right to fish in pursuit of a moderate livelihood.

In 1999, the Supreme Court of Canada upheld the Mi’kmaq treaty right to fish in pursuit of a moderate livelihood, but under federal government regulations for conservation.

Ottawa spent half a billion dollars integrating Indigenous bands into the commercial fishery through licence buy-backs and training, but it never defined moderate livelihood.

The ambiguity led to violence last year when several bands launched their own self-regulated lobster fisheries — all taking place outside of commercial lobster seasons in the area. In October, two facilities storing Mi’kmaw catches were vandalized, including one that was later burned to the ground.

Indigenous harvesters also alleged hundreds of their traps were pulled by non-Indigenous commercial fishermen who accused DFO of allowing a fishery that violated its own rules.

After tensions abated, DFO pulled hundreds of Mi’kmaw traps out of the water, many bearing band moderate livelihood tags.

When defending the self-regulated fisheries, the Mi’kmaq point to the huge number of commercial traps in the water compared to those from bands.

The Nova Scotia Seafood Alliance, which represents shore buyers, said that is misleading.

Stewart Lamont of Tangier Lobster said he accepts the treaty right but maintains the fisheries must take place within commercial seasons.

“The lobster biomass is extremely vulnerable during certain months of the year, most particularly late July, August, September, October, when lobsters are going through their annual molt,” said Lamont.

“They’re literally hungrier than normal. They’ve taken on a new shell. They are far more readily embraced into a trap.”

He said hauling lobster at that time is shortsighted.

“By the same token, they are of far lesser quality. They tend to be soft and medium shell. It’s not a premium product.”