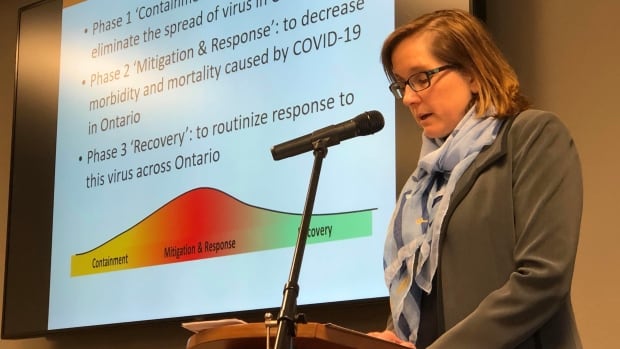 The chief medical officer of health for the Thunder Bay District acknowledges the region could move into the next stage of the province’s pandemic response framework this week.

The Thunder Bay District, is currently in the yellow, or protect, level of the government’s colour-coded system, after being moved from the lowest zone a few weeks ago. There were 12 new cases of COVID-19 reported on Tuesday.

The district has a total of 320 cases of COVID-19 during the pandemic, with 203 of them having been announced since the start of November, including a single-day high 33 on Sunday.

“When we look purely at our numbers, we are, I would say, in the orange level, for sure,” Dr. Janet DeMille said on Tuesday, adding she will provide contextual information about the local situation before the province makes a decision on whether to move the area into further restrictions.

“I think that there will be serious consideration given to moving into the orange level.”

All of the new cases reported on Tuesday are located within Thunder Bay and the surrounding area, with one person hospitalized. Nine are close contacts of existing cases, one had no known exposure to the virus and the other two remain under investigation.

The health unit’s website shows a total of three people in hospital with COVID-19, with one patient in the intensive care unit.

There have been three substantial outbreaks that have driven up the case numbers, including one at the Southbridge Roseview long-term care home where 37 residents and 15 staff members have tested positive. Two residents have died from COVID-19.

DeMille said 28 of the resident and staff cases, which she described as “worrisome,” were reported on Sunday following facility-wide testing a few days earlier. She said another round of testing will be done on Tuesday.

“There are a lot of measures that have been put in place, even strengthened further, in the last few days to really stop any ongoing transmission in the facility,” DeMille said, adding that includes additional staff resources as well as enhanced infection prevention and control measures.

The outbreak at the home is likely not over, DeMille said, but added she believes it is under control.

DeMille said she would have hoped that there would have been a drop in the number of cases not related to that outbreak. As of Tuesday, there are 100 active cases throughout the Thunder Bay District.

“I just think we have ongoing spread,” DeMille said.

“We kind of know where people are getting it from. We can find the direct links between people of our active cases but we just have had so many active cases and a couple of substantial outbreaks aside from Roseview that we’re seeing the ongoing spread.”