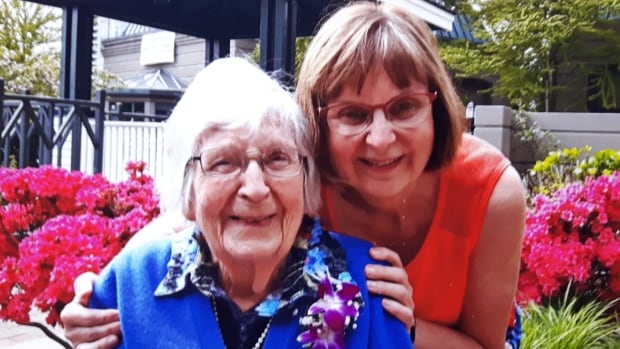 It’s not COVID-19 or the flu that has Lynanne Beck most worried about her mother in long-term care.

What Beck fears is the mental anguish her 101-year-old mother is suffering because of what she calls confusing and overly-strict visitation rules.

Beck’s mother, Eileen Rodgers, is a resident at Queen’s Park Care Centre in New Westminster, which is in the midst of a COVID-19 outbreak.

Beck, a retired nurse, said her mother is isolated and hurting because she isn’t getting enough family contact.

Beck added that, as her mother’s medical representative, she can’t effectively advocate for her if she can’t see her frequently.

Despite the COVID-19 outbreak at the care centre — declared on Saturday — Beck wants to visit her mother, wearing any protective equipment necessary.

“She’s just going to deteriorate. We know that and we’re just so afraid for her,” Beck, 69, said. “When I know she’s suffering, I’m suffering, too.”

Beck said her mother is blind, has hearing loss in both ears and struggles with comprehension due to a stroke.

Communication is nearly impossible over the phone, Beck said. Unless someone is physically there to explain to her what’s going on, her mother becomes frightened and confused. She said staff have not provided enough information, and communication with them has been poor.

Beck said B.C.’s public health rules restricting people in long-term care are hurting her family more than they’re helping and she wants them to be applied more flexibly.

At the beginning of the coronavirus pandemic in B.C., visits were forbidden at long-term care facilities to prevent spreading the virus to vulnerable residents. In late June, the rules changed, allowing one designated family member to visit.

Beck, who lives in Victoria, is not her mother’s designated visitor. Her brother in West Vancouver is, but for the past 15 years she has taken her mother to medical appointments.

Rodgers moved into Queen’s Park on Oct. 8. She had to self-isolate until Oct. 22 and then the outbreak was declared Oct. 24.

The timeline of Rodgers’ move-in and the declaration of the outbreak, Beck said, meant her brother got only one visit with their mother, separated by plexiglass.

“She reached out her hand when she got there to try and touch him, not knowing she wouldn’t be able to hold his hand,” Beck said. “She couldn’t understand a thing he was saying.”

Beck believes in some cases, more than one visitor should be allowed — and the barrier and other precautions could be eliminated.

“I need to be with her in person, touching her, connecting with her, so she even feels comfortable to express herself to me,” Beck said.

The Fraser Health Authority, which is responsible for Queen’s Park Care Centre, said it recognizes the pandemic has been difficult for families.

In a statement, it said measures like visiting restrictions, twice-daily temperature checks and regular health checks are in place to protect residents.

“Our priority is to ensure that our patients, families and staff are protected and we prevent transmission of COVID-19,” the statement read.

The authority said it could not speak to specifics about Eileen Rodgers’ family’s concerns but said staff have talked to the family about them.

Facilities not experiencing an outbreak, however, could make visits more frequent, longer and potentially allow more than a single person.

“We’re not achieving the level of support for our residents from their family members that that we really should be,” Mackenzie said.

A survey on visiting at long-term care facilities is set to be released Tuesday, Mackenzie said.

“I’m hopeful that we’ll see some action,” she said.

CBC Vancouver’s Impact Team investigates and reports on stories that impact people in their local community and strives to hold individuals, institutions and organizations to account. If you have a story for us, email [email protected].