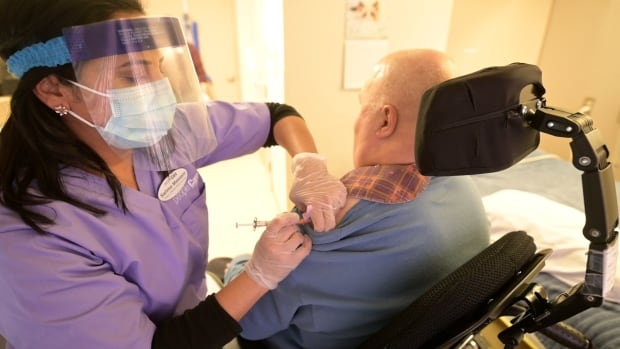 The region’s mobile vaccination clinic made one of its first stops Tuesday at the Golden Years Nursing Home in Cambridge. The region provided photos and video interviews of some of the people receiving the vaccine, as media were not permitted to attend in-person.

“It makes me feel a lot more secure,” said Gezinus Meindersma, one of the people who received the vaccine. “I was terrified if it ever did get in the building and because it spreads like crazy, and you know, I have underlying issues, so I would not be a good candidate for COVID.”

Elizabeth Flint, who also received the vaccine, also said that it made her feel safe.

“I don’t worry about anybody coming near me. I’ve had the defence that I needed, so this is good,” she said.

Regional officials say being able to get the vaccine into long-term care homes is a vital step in reaching more people.

George Ballentine, who’s wife is a resident of Golden Years, called the vaccine roll-out a start.

“Hopefully we get more of it coming into the country, and then they can spread it out quickly and better. But we’ve started,” he said.

Health officials have asked the province to provide more vaccine to ramp up local inoculations.

The region reported 154 new cases of COVID-19 Tuesday. There were no new deaths.