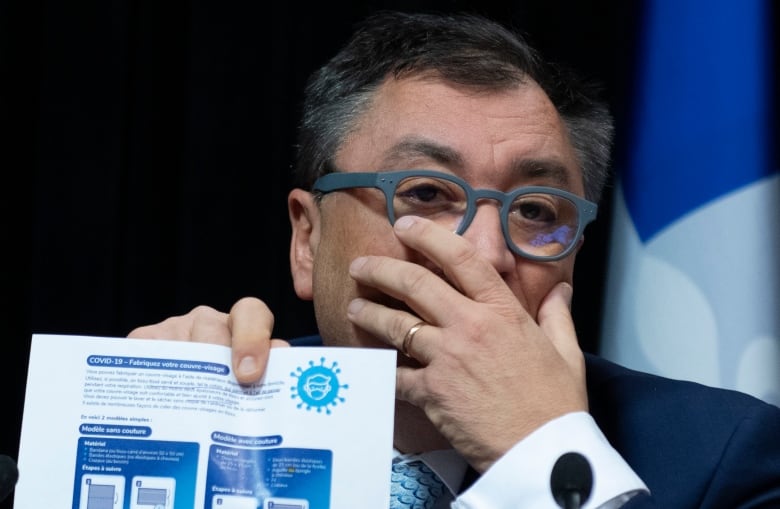 As the province prepares to unveil its plan to gradually reopen aspects of public life, Public Health Director Dr. Horacio Arruda has changed his public opinion on masks, now recommending people wear them if they anticipate being in a situation where distancing isn’t possible.

He said people should closely follow guidelines the government released yesterday for wearing them, including washing hands before putting one on and removing them.

Arruda said people could make their own masks, as long as they are clean and have at least two layers of fabric.

Arruda had been adamant before that his fear was masks would provide Quebecers with a false sense of security because they may be more inclined to touch their face when wearing one.

He also didn’t want people to purchase masks in short supply that would be more useful to health-care workers.

One Montreal hospital in the grips of a COVID-19 outbreak is having to transfer patients elsewhere.

Earlier this week, Sacré-Coeur Hospital in northern Montreal revealed at least 120 of its patients had tested positive for the coronavirus, including some cancer patients, and two had died.

The hospital has since taken measures to prevent further spread, but is sending geriatric and orthopedic patients to Jean-Talon Hospital.

Sacré-Coeur is one of the few hospitals designated to treat COVID-19 patients, but the nearby Fleury Hospital will begin accepting the patients as well, Radio-Canada has learned.

The virus has created “two separate worlds,” Premier François Legault said Friday — one inhabited by the residents of long-term care homes and the other by the rest of society.

The situation in some private seniors’ homes — such as one in Dorval that saw at least 31 deaths in less than a month — has led him to consider making all long-term care facilities public.

“I want to make sure the quality of service is the best,” Legault said. “We owe that to [the elderly].”

Quebec is currently in need of thousands of workers to fill the gaps in its health-care network. As of Thursday, nearly 10,000 absences were recorded — about half due to workers in 14-day quarantine.