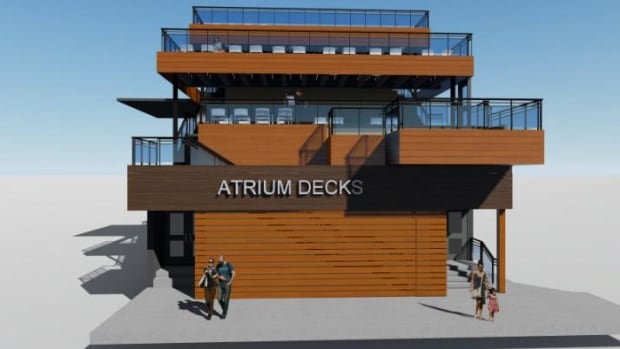 One downtown Halifax deck got the blessing of Halifax regional council Monday night, while a second one was rejected.

The Maritime Centre, along Barrington Street, wants to create an outdoor space for the new location of Niche restaurant. The proposal calls for a deck three metres above ground along the Salter Street side of the building that would protrude 30 centimetres over the sidewalk.

Coun. Waye Mason said given that the property owners have been encouraged to liven up that side of the Maritime Centre, he can live with that.

“I feel a one-foot encroachment over quite a wide sidewalk there and at that height is minimal impact and it achieves other goals that we’ve identified,” said Mason.

Council unanimously endorsed the application, even though staff recommended against it.

But an application from the Atrium bar along Argyle Street did not get the go-ahead from council. The owners are renovating the building and proposed four levels of decks. One of them would have hung over two-thirds of the sidewalk.

Mason was concerned about how much that would block the sun.

Coun. Sam Austin agreed it was inappropriate given it’s located across the street from the Grand Parade, a prominent civic space.

“To cover over the sidewalk to this degree, I think this one should be a no,” he said.

“Particularly in this age where we’re trying to encourage life in our downtown, I would be supportive of the people who own this property and the amount of money they are putting into it,” said he said.

Council voted 13-4 to reject the application. The mayor and councillors David Hendsbee, Tim Outhit and Matt Whitman voted in favour.