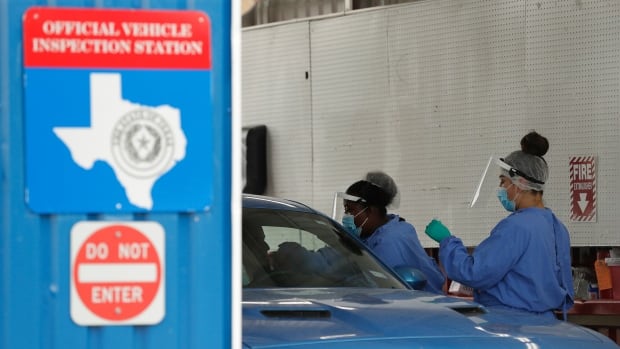 Texas surpassed 10,000 new coronavirus cases in a single day Tuesday for the first time, crossing a sobering milestone rarely seen since the pandemic first hit the U.S. in March.

The state’s record high of 10,028 new cases served as another alarming new measure of the swift resurgence of COVID-19 nationwide and the failures of the country’s response. Republican Gov. Greg Abbott aggressively began one of the country’s fastest reopenings in May, but reversed course last week, ordering bars closed and mandating face coverings in much of the state.

New York and Florida are the only other states to record more than 10,000 new cases in a single day. New York hit that grim total back in April, when New York City hospitals were overwhelmed and hundreds of people were dying every day. Florida topped 10,000 confirmed cases last week.

Texas surged past 8,000 statewide hospitalizations for the first time over the Fourth of July weekend — a more than quadruple increase in the past month.

Mayors in some of the state’s biggest cities — including Austin, San Antonio and Houston, which also are among the biggest in the U.S. — have warned that hospitals could soon become overwhelmed with coronavirus patients.

Deaths remain lower in Texas compared to other big states. As of Tuesday, Texas has confirmed that at least 2,715 people have died due to COVID-19. But fatalities have climbed in recent days, and in addition to an alarming acceleration in new cases in Texas, the seven-day infection rate has climbed to 13.5 per cent.

The number of infections is thought to be far higher because many people have not been tested, and studies suggest people can be infected with the virus without feeling sick.

What’s happening with coronavirus in Canada

As of 2:30 p.m. ET on Tuesday, Canada had 106,107 confirmed and presumptive coronavirus cases. Provinces and territories listed 69,830 of the cases as recovered or resolved. A CBC News tally of deaths based on provincial reports, regional health information and CBC’s reporting stood at 8,751.

B.C.’s provincial health officer says the controversy over airborne transmission of the coronavirus has been overblown, after hundreds of scientists signed a letter calling for the World Health Organization to revise its recommendations.

WATCH | Scientists call on WHO to update guidance on airborne transmission of coronavirus:

A group of 239 scientists from around the world say there is enough evidence that the coronavirus can spread by airborne transmission and urged the World Health Organization to revise its guidelines, but there is debate within the scientific community. 1:55

But Dr. Bonnie Henry suggested Monday that the letter was designed “to foment a bit of controversy,” and the disagreement is part of an ongoing discussion about how coronaviruses and other illnesses like influenza are spread.

“I actually think it’s a little bit of a tempest in a teapot in that we all agree on the extremes and we’re fussing a little bit about how much we need to focus on the bits in the middle,” Henry said during Monday’s coronavirus briefing.

With airborne viruses like the measles and smallpox, tiny disease-carrying particles can float in the air for hours, even travelling down hallways and through ventilation systems.

The World Health Organization on Tuesday acknowledged “evidence emerging” of the airborne spread of the coronavirus.

“We have been talking about the possibility of airborne transmission and aerosol transmission as one of the modes of transmission of COVID-19,” Maria Van Kerkhove, technical lead on the COVID-19 pandemic at WHO, told a news briefing in Geneva.

While discussing potential airborne transmission of the coronavirus, the World Health Organization detailed its systematic science- and evidence-based approach to reach its conclusions.  3:34

Benedetta Allegranzi, WHO’s technical lead for infection prevention and control, said there was evidence emerging of airborne transmission of the coronavirus, but that it was not definitive.

“The possibility of airborne transmission in public settings — especially in very specific conditions, crowded, closed, poorly ventilated settings that have been described — cannot be ruled out,” she said.

“However, the evidence needs to be gathered and interpreted, and we continue to support this.”

Van Kerkhove said WHO would publish a scientific brief summarizing the state of knowledge on modes of transmission of the virus in the coming days.

Here’s what’s happening around the world

Serbia’s president announced the reintroduction of a lockdown after the Balkan country reported its highest single-day death toll from the coronavirus Tuesday.

President Aleksandar Vucic called the virus situation in the Serbian capital of Belgrade “alarming” and “critical” as the city’s hospitals neared their capacity limits.

Vucic said the government would reimpose a curfew that would “probably” last from 6 p.m. Friday until 5 a.m. Monday. He also said groups of no more than five people would be allowed together.

WATCH | If everyone follows local guidance, parts of the country can continue to open safely, infectious disease specialist says:

According to Dr. Isaac Bogoch, a Stage 3 opening is possible in Ontario as even the hot spots are largely under control. 6:37

The country’s Health Ministry said Tuesday that 13 people had died in 24 hours and 299 new COVID-19 cases were confirmed.

That brought the total to 16,719 confirmed cases and 330 virus-related deaths since the start of the pandemic in Serbia, which went from having one of Europe’s strictest lockdowns to a near-complete reopening at the beginning of May.

Australia has been among the world’s most successful countries in containing its coronavirus outbreak — with one exception.

The southeastern state of Victoria had some of the nation’s toughest pandemic measures and was among the most reluctant to lift its restrictions when the worst of its outbreak seemed to have passed.

But as most of the country emerges from quarantine, the virus has resumed spreading at an alarming rate in Victoria’s capital, Melbourne. The city is buckling down with more extreme and divisive measures that have ignited anger and arguments over who is to blame.

Victoria Premier Daniel Andrews said Tuesday that the entire city and some of its surrounding areas will be locked down again from Wednesday night under tougher restrictions than were imposed during the first shutdown that started in March.

“We are in many respects in a more precarious, challenging and potentially tragic position now than we were some months ago,” Andrews said.

About 3,000 residents of nine public housing highrise buildings were given just an hour’s notice at the weekend before being prohibited from leaving their apartments for at least five days.

“The amount of police officers makes us feel like we’re criminals,” said Nada Osman, a resident of one of the buildings. “It’s overwhelming. It’s scary. It’s like we’re caged in.”

Forty suburbs that are virus hot spots have been locked down by postal code since last week, with the result that businesses and households in some areas face restrictions while ones across the street from them do not.

South Africa’s confirmed coronavirus cases have surpassed 200,000 as the country continues to post some of the highest daily numbers in the world.

Nearly one third are in the new hot spot of Gauteng province, which includes Johannesburg and the capital, Pretoria.

The African continent overall has more than 477,000 confirmed cases.

The rate of new virus infections and deaths in India are now rising at their fastest pace. Health officials fear the number of deaths could rise significantly in the coming weeks.

India, with a population of 1.3 billion, is the third worst-affected nation in the world. Only the United States and Brazil have had more cases.

China on Tuesday reported eight new confirmed coronavirus cases, all of them brought from outside the country, with no new deaths, as almost 11 million students gathered to take the crucial national university entrance exam.

The National Health Council reported that 403 people remained in treatment for COVID-19, while 121 people were in isolation being monitored as suspected cases or for testing positive for the virus without showing any symptoms.

China has reported a total of 4,634 deaths among 83,565 cases of the novel coronavirus since it was first detected in the central city of Wuhan late last year.

The gruelling two-day university entrance exam can be a key determinant of a student’s future and was pushed back weeks as China worked to bring down infections.

It is believed to be the first mass gathering event since the virus outbreak and administrators are enforcing strict rules to prevent infections, including proof of wellness, physical distancing and the wearing of masks.

Saudi Arabia has issued guidelines for about 1,000 pilgrims who will be allowed to participate in the hajj pilgrimage in Mecca later this month, an experience that will be unlike any before because of the coronavirus pandemic.

The pilgrims will only be able to drink holy water from the Zamzam well in Mecca that is packaged in plastic bottles, and pebbles for casting away evil that are usually picked up by pilgrims along hajj routes will be sterilized and bagged ahead of time. Pilgrims will also have to bring their own prayer rugs.

The guidelines were announced Monday as Saudi authorities prepare for a very limited hajj, which for the first time will not include pilgrims from outside the country. Instead, the kingdom said that 70 per cent of pilgrims allowed to make the pilgrimage this year will be from among foreign residents of Saudi Arabia and 30 per cent would be Saudi citizens.