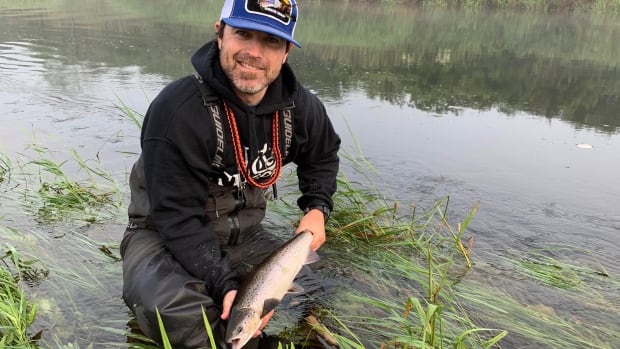 Every time life-long fisherman Mark Dort wades into St. Marys River to cast his line and try to lure fish to his fly, he hopes he’ll land a big one.

But this fall, his aim wasn’t just to snag a large trout in the picturesque waterway on Nova Scotia’s Eastern Shore. It was also to catch the eye of federal Environment Minister Jonathan Wilkinson through a post on a federal government website.

Dort is part of a group that wants to see St. Marys designated a heritage river and is using a biennial consultation process at Parks Canada to try to garner support for the idea. By law, the minister responsible for the agency must consult with Canadians every two years.

“The goal of our post is to draw more attention the St. Marys River overall,” Dort said during a phone interview from the banks of the West River where he was on a salmon fishing trip this week.

“It was just good timing that Parks Canada wanted to have a virtual consultation and I thought it would be an excellent opportunity to try to get our message in front of the minister, as well as gain public support from the community that wants to support the St. Marys River.”

Dort recently joined the volunteer board of the St. Mary’s River Association. The group promotes the river and tries to protect it as a healthy ecosystem for Atlantic salmon. Dort, 41, worked for the association in his teens and has supported its work since then.

There are currently 40 designated heritage rivers in the country, according to Parks Canada. The designation is meant raise awareness and promote the stewardship of the rivers.

In his post on the Parks Canada consultation forum website, Dort noted the St. Marys River is one of the longest in Nova Scotia and is known “as one of the best salmon producing rivers in Atlantic Canada.”

“It has a long history of settlement and use, beginning with Indigenous peoples, and including African slaves, buccaneers, explorers, and settlers from many parts of the world over time,” he wrote.

The river also runs through Sherbrooke Village, which has a museum dedicated to the area’s lumber and shipbuilding history and has 25 original buildings on site.

The past two Parks Canada consultations have included an online component for feedback.

Dort said prior to the fall consultation period, the group had sent the minister a letter outlining its plans but had not yet received a response.

In a video posted on the web page devoted to the Parks Canada consulation, Wilkinson made note of the ongoing COVID-19 pandemic and the renewed importance of protecting outdoor spaces.

“In these uncertain times and as we look toward the future, I want to hear your thoughts about how Parks Canada can continue to protect our natural and cultural heritage while providing safe spaces for Canadians to enjoy the outdoors in a safe way,” he said.

Dort saw it as an opportunity to further drive home the group’s message about the value of the St. Marys River.

“The formal application process is kind of lengthy, so this here may help us really add a priority to it and perhaps let the minister see how many people, through the social media post, that are interested in seeing the St. Marys River become a heritage river,” he said.

Michael Nadler, vice-president of external relations and visitor experience at Parks Canada, said although Dort’s post would not supplant the formal designation process, it could bring attention to the request.

“There’s a specific process for that type of designation, but his signal allows us to do some followup on it,” said Nadler.

During the 2017 consultation period, which ran three weeks that January, more than 2,500 people participated and shared ideas through the agency’s website.

Many thousands more people offered suggestions and took part in face-to-face meetings, one of them in Halifax. Those ideas and suggestions were filtered down and turned into 75 “action items” — projects or commitments to make changes at Parks Canada.

Dort’s submission, along with more than 200 others, will go through a similar process after the consultation process wraps up Friday

Nadler said although not every idea would be reflected in the minister’s response, the agency valued every contribution, including the one put forward by Dort on behalf of the St. Mary’s River Association.

“Even though that may not be articulated in the minister’s response, what he’s allowing to have happen there, he’s allowing us to follow up and explore with stakeholders that opportunity and determine whether there’s somebody that can champion that proposal,” said Nadler.