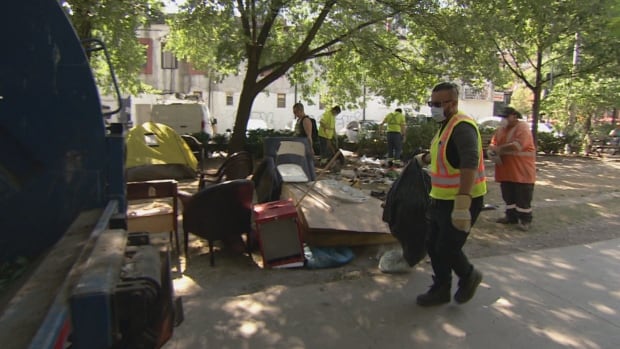 City workers have moved at least 60 people living in tents in two downtown parks to interim housing after local residents complained about feeling unsafe in the neighbourhood.

Crews cleared the parks of debris on Tuesday. As of 5 p.m., there were two tents left in George Hislop Park, one left in Norman Jewison Park and one left in the backyard of Sanctuary Ministries of Toronto, a Christian charity that seeks to provide community for marginalized people.

“We think it’s great that people have housing. We want what’s best for those that we work to be in community with,” Greg Cook, an outreach worker with Sanctuary, told CBC Toronto.

“People were really excited, although people were nervous having to pack. Anytime you move it’s tough.”

Cook said Sanctuary staff worked with employees from the city’s Street to Homes program and Shelter, Support and Housing Administration division to relocate the people. The city used TTC buses and a city van to transport the people to former hotels that have been turned into shelters in midtown Toronto, North York and Scarborough, he said.

“I was there yesterday helping people pack and making sure it went as smoothly as possible,” Cook said. “One of our concerns is that there are enough supports in place for people.”

Residents and business owners expressed relief at the clearing of the parks, but said the city was slow to respond to concerns. They acknowledged, however, that many people are experiencing hard times during the pandemic, those without homes need to be safe, and homelessness is a major social issue in Toronto.

Margarita Villarroel, a resident, said she is pleased, but added: “It took way too long. It was extreme for everyone. We’ll see if things will be normal once again.”

Residents had told Mayor John Tory that they were afraid to walk in the area and were subjected to insults and threats. They also said they witnessed drug use, saw needles scattered around, and that there was vandalism.

Deepak Ruparell, owner of the Anndore House hotel and member of the board of Can-Alliance, a volunteer organization that represents residents and businesses in the area, said it was time for the city to take action.

“First and foremost, this is huge social issue in our city. Most residents and businesses around here are pretty compassionate and they understand the need to make sure we have appropriate social housing and social issues addressed by all levels of government,” Ruparell said.

Ruparell said the encampment, however, was “traumatic” for residents and businesses. He noted that residents had no access to green space because the people in tents had taken it over.

“It’s a relief to see that the city is finally doing something to house them in different locations. It’s good to see that,” he added.

In an email to constituents on Tuesday, Coun. Kristyn Wong-Tam, who represents Ward 13, Toronto Centre, said the city plans to set up fencing around the parks so the green space can be rehabilitated.

“Once everyone has been successfully rehoused, park staff will immediately clean the park and install a fence around the perimeter to allow for the lawns, flower beds and trees to recover from the heavy soil compaction and contamination,” Wong-Tam said

City offered indoor spaces to everyone in tents

The city’s Shelter, Support and Housing Administration division said in an email on Tuesday that staff offered inside spaces in shelters, hotels and interim housing to everyone who was sleeping in the two parks. It said at least 60 people accepted the offer.

“The city only clears an encampment site after offers of safe inside space have been made to all individuals sleeping on-site,” the city said. “All inside spaces have achieved 100 per cent physical distancing of 2 metres between beds.”

The city added that encampments are not permitted in city parks and people are not allowed to erect tents on city property.

“The city is working around the clock to secure additional inside spaces so everyone sleeping outdoors is offered a place inside (shelter, hotels or interim housing). As more spaces open, clients will be provided options to move inside and will be supported to do so with their belongings, and abandoned belongings will be cleared and that encampment site cleaned,” it said.

As of April 29, city staff began to work with people living in encampments. As of Tuesday, the city said it has moved at least 390 people from encampments to indoor spaces in shelters, respite sites, hotels and interim housing, and has cleared at least 41 encampments.