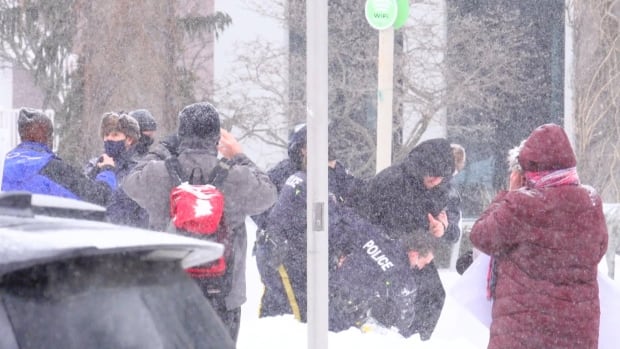 Charges have been laid against several people at an anti-mask protest held in Moncton on Sunday.

All five were issued tickets for alleged violations of New Brunswick’s Emergency Measures Act. It’s alleged they attended an outdoor gathering of more than five people while not wearing a mask.

Crown prosecutor Remi Allard told provincial court Judge Lucie Mathurin he was objecting to their release from custody but wanted time to review their files in more detail.

Later in the day, he told the judge the Crown would consent to their release on various conditions, including staying away from Moncton City Hall, where protests have been held. They are scheduled to return to court to enter a plea on Feb. 22.

“We can no longer gather peacefully?” Teakles asked the judge Monday afternoon.

“I’m not here to give you a legal opinion,” Mathurin said, telling her she’d have to consult with a lawyer.

Earlier in the day, Allard said he was seeking to have all five held pending bail hearings.

“At this point it is repetition of the offence,” Allard said.

‘This is false imprisonment’

Rossiter in a boisterous appearance told the judge he had a medical exemption that allows him not to wear a mask.

Others charged also alleged they have medical exemptions that allow them not to wear masks.

Rossiter, appearing by phone, yelled that he wasn’t part of the protest and was only there filming.

“This is false imprisonment,” Rossiter said.

After the judge outlined the ticket involving the alleged violation of the province’s emergency order, Rossiter said “there is no emergency.”

“Everything you just said is fraudulent, it’s pathetic,” he said, going on to say he would charge all of the police officers involved.”

“Everything you’re doing is illegal, you criminals,” he said.

David West, 54, of Riverview, Nicholas DeAngelis, 34, of Bathurst, and Britney Green, 31, of Bathurst, were issued tickets for violations of the Emergency Measures Act.

Mathurin appeared skeptical when the Crown objected to their release earlier in the day.

“This is the 10th such occasion that the RCMP have dealt with her,” Allard said of Green, noting she had also been ticketed by the Kennebecasis Regional Police Force on Saturday. The judge noted that would have involved travelling between two health zones, something that’s discouraged under COVID-19 rules.

West, DeAngelis and Green remain in custody with a bail hearing scheduled for Thursday.