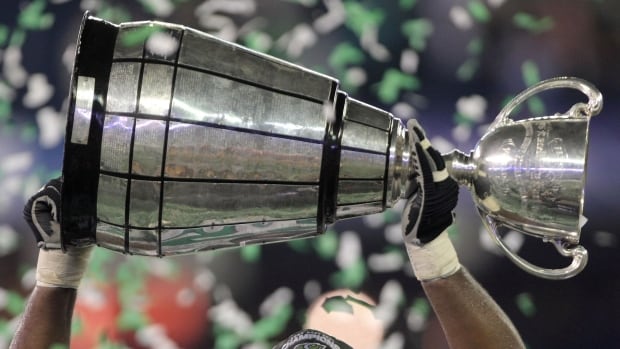 The Grey Cup won’t be presented this season, but fans will get a chance to have their name associated with the iconic trophy.

The CFL is allowing fans to have their names inscribed on a permanent new base to the Grey Cup. The 1.23-metre high base will be made of Canadian maple and aluminum, on which the trophy will rest at all its public appearances.

Last week, the CFL cancelled the 2020 campaign due to the COVID-19 pandemic. It will mark the first time since 1919 that the Grey Cup won’t be presented.

CFL season-ticket holders will have first crack at having their names added to the base for $349. The exclusive window began Monday and runs through to 11:59 p.m. ET on Sunday.

After that, other fans will receive the same opportunity for $399.

The proceeds will go to the CFL’s nine teams and players.

“The Grey Cup Fan Base is our way of recognizing that our fans are, in so many ways, the foundation upon which this great league and the legend of the Grey Cup stand,” CFL commissioner Randy Ambrosie said in a statement. “When COVID-19 forced us to cancel the 2020 season, we said we are absolutely committed to making 2021 the greatest comeback in the history of the CFL.

“The Grey Cup Fan Base is a wonderful way to help our league, and your team, come back stronger than ever. It’s an incredible opportunity to show your pride in our storied history and your faith in our bright future.”

The CFL Players’ Association also is supporting the idea.

Between other leagues starting up again and the CFL’s livelihood depending on ticket sales, Devin Heroux explains the ramifications of the lost season. 12:05

“The Grey Cup Fan Base is a great innovative idea that is supported by the players as a way to connect our passionate fans even closer to our game,” said Solomon Elimimian, president of the CFLPA. “It not only recognizes and celebrates our fans, but it connects our players, our fans, and the teams across the league in a meaningful way.

“This fan support initiative will help us through 2020 and into 2021 as we look to come back stronger than ever before.”

The base will consist of of 10 pillars on each side, in recognition of of the CFL’s nine franchises and proposed expansion club in Halfax. Each pillar is illuminated.

“The design is intended to evoke the idea that our fans are lifting up the Grey Cup, which belongs to all, and the CFL and Canada along with it,” Ambrosie said. “In this unprecedented and challenging year, we wanted to find a way to show how much we appreciate our fans’ faith and dedication.

“And we wanted to do that in a way that allows fans to show that they deeply believe in what the CFL and Grey Cup mean to Canada, that nothing is going to stop us from being together again, and that we will continue to add to the legend and legacy of the Grey Cup. The Grey Cup fan base represents hope and confidence. It’s a wonderful idea and a beautiful work of art.”