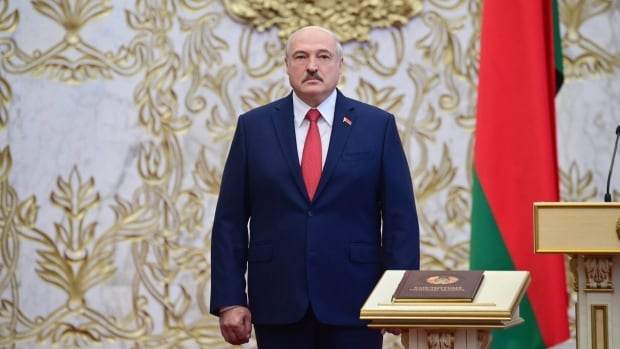 Canada, along with the United States and United Kingdom, has condemned the inauguration of Belarusian President Alexander Lukashenko and is seeking to hold his government accountable by preparing sanctions on individuals allegedly involved in human rights violations.

François-Philippe Champagne, minister of foreign affairs, said, “Canada considers that Alexander Lukashenko lacks the legitimacy to be the leader of Belarus.”

Since the “fraudulent presidential elections” in August, Lukashenko “continues to display disdain for the people of Belarus by holding a so-called inauguration ceremony behind closed doors,” Champagne said in a statement Thursday.

“Such gestures only show Lukashenko’s disregard for basic democratic principles and the fundamental human rights of the people of Belarus,” he said.

The ceremony, a major state occasion that would normally be conducted with fanfare, took place without prior warning in an apparent attempt to prevent it being disrupted by protests.

Instead, it drew thousands onto the streets of the capital Minsk on Wednesday evening, where security forces chased down protesters and fired water cannon to disperse crowds. Police detained 364 people, the Interior Ministry said.

A video showing a taxi driver rescuing a protester and speeding away from baton-wielding riot police went viral on social media.

Meanwhile, U.K. Foreign Secretary Dominic Raab told the House of Commons in London Thursday that in light of the European Union’s delay in preparing its own sanctions, Britain would join other allies to adopt targeted sanctions against those responsible for human rights abuses.

“We will apply all the tools at our disposal to hold Lukashenko and his regime to account,” he said.

“We are willing to join the EU in adopting targeted sanctions against those responsible for the violence, the repression and the vote-rigging, although the EU process has now been delayed in Brussels,” Raab said. “Given that delay … we’re co-ordinating with the United States and Canada to prepare appropriate listings as a matter of urgency.”

The EU said Thursday that the swearing-in of Lukashenko to a sixth term lacks democratic legitimacy, defies the will of the Belarusian people and will only deepen the country’s political crisis.

🇨🇦 deplores Lukashenko’s unannounced inauguration following a fraudulent election. He lacks the legitimacy as a democratically elected leader. <br><br>🇨🇦 calls for a free &amp; fair election for the people of <a href=”https://twitter.com/hashtag/Belarus?src=hash&amp;ref_src=twsrc%5Etfw”>#Belarus</a>. We are coordinating with the int. partners for an appropriate response.

EU foreign policy chief Josep Borrell reiterated that the 27-nation bloc did not recognize the result of the Aug. 9 election that kept Lukashenko in power after 26 years.

“This ‘inauguration’ directly contradicts the will of large parts of the Belarusian population, as expressed in numerous, unprecedented and peaceful protests since the elections, and serves to only further deepen the political crisis in Belarus,” Borrell said.

Borrell underlined the EU’s belief that “Belarusian citizens deserve the right to be represented by those they freely choose through new inclusive, transparent and credible elections.” He praised their courage.

On Monday, EU foreign ministers failed to impose sanctions on Belarusian officials suspected of election fraud or of playing a part in a brutal security crackdown on the post-election protests, despite appeals from Lukashenko’s main opponent to take courageous action against his regime.

Cyprus continues to block the sanctions until similar measures are slapped on Turkey for its disputed energy exploration in the eastern Mediterranean Sea. EU leaders will try to break the deadlock when they meet in Brussels on Oct. 1.

In an email to The Associated Press on Thursday, Danish Foreign Minister Jeppe Kofod said, “Lukashenko does not belong in a presidential palace. He belongs on the EU sanctions list.

“The secrecy surrounding his inauguration ceremony just illustrates that he has not been sworn in based on free and fair elections, but on election fraud and violence,” Kofod said.

Lukashenko brushed off the condemnation.

“We didn’t ask anyone to recognize our elections or not recognize them, to recognize the legitimacy of the newly elected president or not,” the news site Sputnik Belarus quoted him as saying.

The 66-year-old leader defended the manner of his swearing-in.

“You know about 2,000 people were invited to the inauguration, together with the military. And it is almost impossible to keep it secret,” he said.

Detained opposition politician Maria Kolesnikova urged protesters not to give up and mocked the security forces who arrested her, in a letter to her father that was shared by the Tut.By news portal.

“You must tell them not to give up, just keep going! These people who have kidnapped me are all incredibly weak and hysterical. They don’t even know how to do their job well,” the 38-year-old musician wrote.

Kolesnikova burnished her status as a hero to the protesters by ripping up her passport to avoid forced deportation to Ukraine earlier this month.