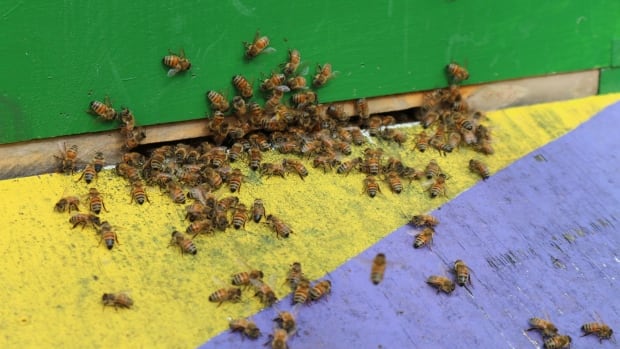 Beekeepers in Newfoundland and Labrador are embarking on a training, testing and advertising blitz this fall in an effort to protect the province’s status as one of the few places in the world free from a pest that devastates honeybees.

There’s been no sign so far of the varroa destructor mite in honeybee colonies in the province. The mite preys on the bees and has wreaked havoc on colonies in other parts of Canada and around the world.

The Newfoundland and Labrador Beekeeping Association is hoping to stave off that devastation, and launched its varroa action plan this week to protect the bees, and educate their keepers.

“It’s a devastating parasite,” said Peter Armitage, a small-scale beekeeper and one of the three co-authors of the plan.

“That combination of feeding on the liver bodies and the fat bodies of the honeybee and the viruses has a very, very devastating impact on honeybee health… after a number of years, when the numbers of Varroa build up in colonies, they generally kill the colony.”

If varroa comes to the province, Armitage said beekeepers will have to fight an uphill battle to keep the parasite out of their regions, considering how widespread it is around the world.

The action plan offers more than a dozen key recommendations for other beekeepers as well as the provincial government.

Those include mandatory testing of in-province bee farms that sell their insects, creation of a volunteer-run testing program and training employees of shipping companies to monitor for illegal bee importation.

“Frankly, I haven’t met anybody outside of Newfoundland who’s optimistic that we can keep this parasite out of here,” Armitage said.

“But, you know, our membership… said we want to do our damnedest to keep this parasite out of here, because we could lose most of our honeybees and it could discourage future hobby beekeepers from taking up the craft, and it could make it impossible to develop a beekeeping industry in this province.”

Armitage is organizing free workshops for other beekeepers to train them on how to monitor and treat varroa mites. His plan calls for increased, regular testing around the province and in specific high-risk areas — close to shipping and import areas.

“If it’s detected, we might have a chance of eradicating it,” he said. “But this is going to take the co-operation of all beekeepers in the province, and it’s going to take some discipline.”

“Every beekeeper can do this, and frankly, if we get varroa mites here in Newfoundland, every beekeeper is going to be doing this anyways. Because if they don’t, their colonies will die. So they might as well learn how to do it now.”

The beekeeping industry has exploded in the past decade in the province, according to the plan, up from six beekeepers in 2010 to more than 100 in 2019.

The industry players have enjoyed the province’s varroa-free status, so an outbreak could be disastrous, according to the head of their association.

“If we had varroa here, just managing the hives is that much harder,” said Rodney Reid, the president of the beekeeping association.

“You have to use miticides to keep the mite at bay. With our long winters and what our climate is like, it would be very challenging to actually keep the hives alive.”

According to Reid, the incredible growth of beekeeping as a hobby and as an industry has also become a pressure point for a possible varroa infection: some beekeepers now face longer waits to buy local bees, and the association is asking them not to try to skip the wait by illegally importing bees.

“We’re trying to grow, so have some patience and some learning in that too,” he said.

“There’s a lot of strain right now trying to meet that demand, and that’s where the risk of having varroa come in comes from. It’s so easy to transport something from the mainland.”

Importation of bees is not strictly illegal, but it is highly controlled. According to Gerry Byrne, the former minister of Fisheries and Land Resources, there has not been a legal honey bee importation in the province since 2017.

The beekeeper association’s recommendations do not include calls for a complete ban on importation, despite requests from one keeper in St. John’s.

“If we do get a varroa incursion, for example the Avalon population does get infected and we have to depopulate the honeybees, where would we get replacement stock from?” asked Reid.

“It’s a finite number of bees available. We’re trying to grow that industry.”

Armitage said varroa has a lot in common with COVID-19, our human pandemic.

Like the provincial response to the pandemic, testing and tracing is also the key for beekeepers.

“We’ve all heard about contact tracing. Well, as part of the varroa action plan, we recommend that beekeepers register their bee yards with the provincial apiarist,” he said.

“So if you do have an incursion, the provincial apiarist can rapidly track down all the beekeepers in the area and then go and have a look in their hives to see if they have varroa.”

Armitage also said Newfoundland and Labrador’s relative success in tackling the COVID-19 pandemic should set good precedent for beekeepers and for the provincial government.

Now that pandemic and disease control is top of mind, he said he believes he’ll have an easier time getting people to understand and buy in to his approach.

“We have something in this province that we can be proud of, our varroa-free status, but we really need to work together to keep it this way. It doesn’t come for free, it’s going to take effort.”