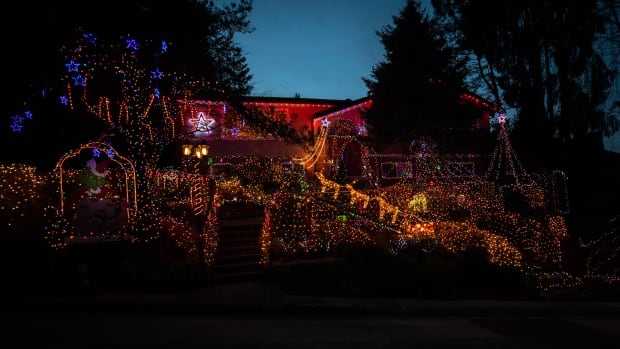 A motion in front of the District of North Vancouver council proposes banning outdoor Christmas lights from being illuminated between 11 p.m. and 7 a.m.

The motion is scheduled to be voted on Monday night, but at least one councillor believes the motion is unnecessary.

“We’re all trying to stay physically distant and keep to our household in a dark and kind of dreary Vancouver winter,” said Coun. Mathew Bond. “People are looking for any chance to bring some lights and some life and some joy to their neighbourhood … so I’m hoping this won’t be going forward tonight.”

Bond says the motion came out of community consultation over the past two years about its nuisance bylaw — specifically in single-family neighbourhoods where noise from construction has caused annoyance.

“The issue of noise and light as a nuisance came up specifically due to a neighbourhood dispute,” he said.

Bond added there had only been three complaints about seasonal lighting in the last five years, and doesn’t believe that meets the bar required for a bylaw.

“It’s important for council to focus on the big issues that impact the most people in our community,” he said.

“And based on the history … I don’t think this is something that should be on our agenda. And I think it’s a waste of time.”

Staff have warned that even if council passes the bylaw as recommended, it “will require careful consideration of what is considered decorative/holiday/seasonal lighting.”

Based on the city’s bylaws, the fine for disobeying the Christmas light bylaw would be $100.