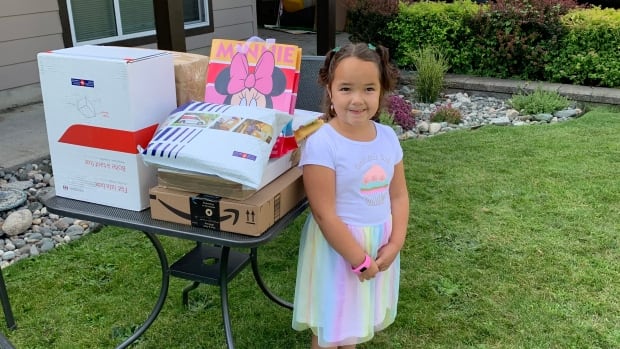 A Kamloops, B.C., girl’s birthday became a global affair on Thursday as people from around the world sent letters and parcels to help her celebrate.

Ray Manning said more than 180 cards and 15 packages were delivered to his home after his daughter’s aunt put a call out on social media asking for folks to help make her niece’s birthday special.

His daughter, Charlie Manning, who turned six years old Thursday, would have usually spent her birthday surrounded by extended family but because they live in Idaho, travel restrictions prevented her from visiting them.

“At the end of the school year, we do a birthday party for her. We couldn’t this year,” Manning said.

Envelopes from Wales, Australia, England, Courtenay, Clearwater, Alberta, Minnesota, Florida and California have arrived in Charlie’s mailbox and more continue to arrive. Some even set up a cupcake delivery from a local bakery.

She doesn’t know a single person who sent them.

“In times like this, to see the kindness of people, it just melts your heart,” Manning said.

Charlie opened her cards on the lawn on Thursday morning. She said her favourite card was from Dublin, Ireland, because it had special stickers on it.

“We want to send a big thank you to everybody that made this day possible for Charlie to have such a great day,” Manning said.

“When you figure what we’re going through right now with COVID and everything and everybody being socially distant, it’s great to see people taking time out in their lives to help a little girl from somewhere else celebrate her sixth birthday.”