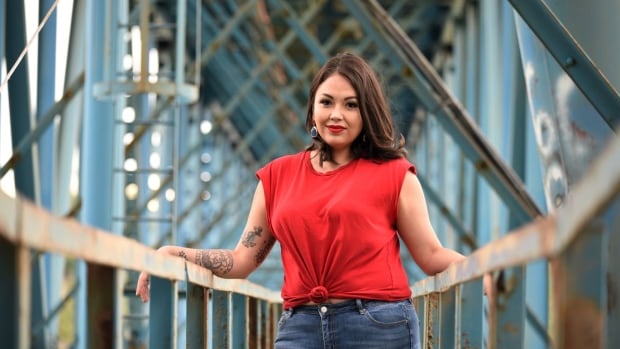 As a single parent, author Helen Knott struggled to make ends meet. Now that she’s had work published, she’s ready to pay it forward to others by giving away a grassroots writing prize.

“I’ve received a lot of support from people along my journey as a writer, so for me it’s about making writing seem like a possibility for another single parent,” said Knott.

Knott is Dane Zaa and Cree-Métis from Prophet River First Nation and is the author of bestselling book In My Own Moccassins: A Memoir of Resilience.

Earlier this week, Knott decided that she wanted to give back to aspiring authors — specifically single parents — by putting a call out for writing submissions, complete with a $150 prize and a one-on-one writing consultation with the author as the prize.

Immediately after the call for submissions was posted, Knott started receiving donations from people on social media — people who read her book, but also authors like The Marrow Thieves‘ Cherie Dimaline.

In 2014, a few people in her community chipped in to help buy Knott a laptop that she needed to get into a writing program at the Banff Centre. Knott said without that generosity, she would not be able to pursue writing as a career, especially as a single mother.

“I remember the struggle of trying to raise my son and write my book,” said Knott. “It was really hard for me at that time.”

She said she comes from a proud people, and when she got the laptop, her dad cried.

Knott said that a lot of writing contests often have barriers like submission fees or very specific writing requirements. With her prize, she wants to make it accessible and barrier-free to encourage anyone who is a single parent to submit.

She chose to include the mentorship to help any emerging writers who are selected. After she won the now-discontinued RBC Taylor Prize, she was mentored by nehiyaw author Darrel McLeod, who has continued to work with her and give feedback and mentorship.

McLeod, who is from Lesser Slave Lake Alberta, is the author of Mamaskatch, which won the Governor General’s Literary Award for nonfiction in 2018.

“I wanted to offer that to somebody — to be able to read their work, and talk with them about where they can improve, what they’re doing right and any other questions that they may have, so I’m excited for that to take place,” Knott said.

McLeod has also stepped in as one of the contributors to the prize. He says that it is tough to get published and he has found what he calls an “Indigenous writing family.”

“As a newer author, it was really hard to find support. There’s people out there trying to make it. And my biggest support came from Eden Robinson,” said McLeod.

The contest is open to single parents in Canada. Knott said that submissions could be any genre, including fantasy or poetry or whatever people feel like and the deadline is August 22nd at midnight. A winner will be announced in September.