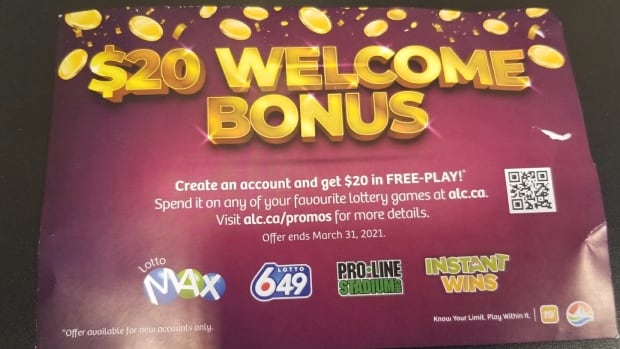 More than 400,000 flyers offering $20 for people to gamble online if they start a new account with the Atlantic Lottery Corporation were sent around Nova Scotia as part of a recent marketing campaign.

Tory finance critic Murray Ryan recently raised the issue of the promotion and its appropriateness, expressing concern that the Crown corporation was, in effect, targeting people who might not otherwise consider playing lottery games online.

Last week, in response to questions from CBC, a spokesperson for the Nova Scotia Gaming Corporation said 409,314 of the flyers were delivered around the province.

“That’s 40 per cent of our population, basically.”

The $20 promotion is only valid for someone who starts a new account. A spokesperson for the Crown corporation would not provide specific details about how successful that effort has been, but said online traffic is picking up.

“As a general practice, Atlantic Lottery does not release financial or other results related to specific marketing campaigns or promotions,” Jillian Moore said in an email.

“Overall, we have seen a significant increase in new accounts being created in recent months, with the number of players on alc.ca doubling since April 1, 2020.”

But Ryan said he remains concerned.

“I think it’s just fraught with potential problems and issues,” he said. “It’s just so inviting.”

The corporation is preparing to launch its own online casino specifically for Nova Scotia residents, something lottery officials have said is necessary to counteract offshore sites people are already using that might not include safety features and do not return any revenue to provincial coffers.