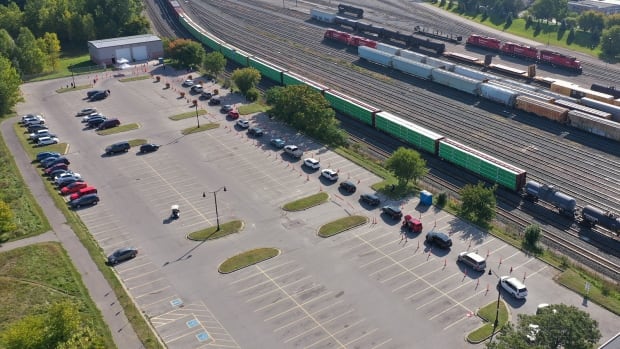 Both of London’s COVID-19 assessment centres saw shorter lines this morning, with the Oakridge Arena centre revamping its process to allow people to leave the lines and come back later in the day without losing their spot in line.

But an anticipated provincial expansion to allow pharmacies to offer coronavirus tests for certain people excluded this region entirely — the locations announced today were in primarily in the Greater Toronto Area and Ottawa region. CBC News has reached out to the province about the rationale.

The Oakridge centre’s line up began shortly after 7 a.m. this morning. But staff at the centre walked around well before the 9 a.m. start time, handing out appointment cards that gave people time frames in which to come back, some of them around 11 a.m. and noon.

That meant people didn’t have to sit in their cars for hours at a time or risk losing their spot in line, which has happened in the days since schools and post-secondary institutions started up again at the beginning of the month and cases in the province and the city soared. That’s left the neighbourhoods around the two assessment centres backed up with cars, and neighbours frustrated.

“We expect to eventually have the same process about both facilities, but right now we’re dealing with a site-based challenge at the Carling site,” said Mike McMahon, executive director of the Thames Valley Family Health Team, which runs both sites.

Carling revamp next up

The layout of the parking lot around Oakridge Arena makes it easier for workers to hand out tickets that determine time slots and allow cars to turn around and come back later. The layout of the Carling site includes a long, narrow laneway that makes turning around difficult, he said.

“Now that we’ve had this day at Oakridge, our team is looking at some quality improvements and at rolling this out in the future at Carling,” McMahon said.

People have been flooding the line despite the fact that health officials are asking those without symptoms not to get tested.

But many employers, child care facilities and schools, require a negative test for employees, kids or students, to come back after calling in sick. Other employers require workers to get tested every few weeks.

McMahon said the number of people with symptoms getting tested has increased at both sites, from about 1/3 of the people seen every day to about half to 2/3. Assessments of people with COVID-19 symptoms take longer and require more specialized nurses. Vehicles were lined up for blocks to get into the Oakridge COVID-19 assessment centre in London, Ont. on Sept. 22, 2020. 0:40

He said the working group that runs the two assessment centres has not considered moving either centre to a less populated location such as the Western Fair grounds, where a field hospital is set up in case of large numbers of patients.

“If anything we’re looking for a way to get a third assessment centre for the west region, so long as it has a different and discernable testing flow, such as health care workers or others without symptoms,” McMahen said.

“We’ve looked at having drive-thru assessment centres, but they’re time limited. We haven’t heard of any that are winter-ready.”