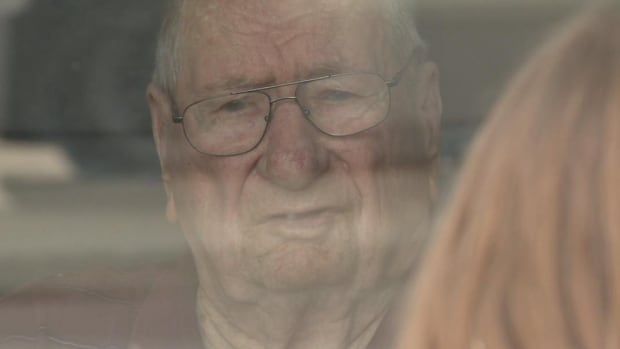 John “Jack” Brownwell has seen a lot in his 100 years.

He’s lived through the Great Depression, the Second World War, even the jitters of nuclear annihilation during the Cold War and now, the coronavirus pandemic.

It’s why for his 100th birthday, he’s looking at his wife Jill and the rest of his family through a hospital window, rather than from the other side of a birthday cake on a dinning room table.

“It’s different. I’m only allowed so long,” his wife said of visiting the love of her life behind a pane of glass. “It’s too bad.”

A year into the coronavirus crisis, we’ve all grown accustomed to window visits and socially-distanced birthday parties, but in Brownwell’s case, there’s something joyful and poignant in celebrating a lifetime that’s spanned a century. Especially in defiance of a virus that’s robbed so many families of their time together.

They sing happy birthday, wave and blow kisses. Each taking turns to wish him well, to tell him they love him, miss him and can’t wait to give him a hug when the pandemic is all over.

“It’s not ideally what we wanted to do,” said his daughter Tracy Sharp, who organized the window gathering of family and friends outside Parkwood Institute.

“We wanted to have a celebration at the Legion because that’s what dad’s been a member of for half a century and they’re great at supporting these guys, but we can’t do that. So I just had to do the best we could.

“It’s still something to be excited about and we wanted to share the special day with him.”

What makes it special isn’t just turning 100, but the rare chance to reclaim some time with his only grandkids, Tanner, 12, and Layla, nine, from a pandemic that’s already stolen a year of the moments they have left.

“Usually, we’d be inside doing this but because of the pandemic, we can’t,” said Layla.

“He used to live right beside our house,” said Tanner. “So he’d walk over every day and say ‘hi’ and stuff and he’d tell us stories from the war and from his childhood, but now because of COVID he’s living at the hospital.”

During the war, Brownwell was a flight officer assigned as the bombardier aboard a Halifax Mk III heavy bomber as part of the RCAF’s No 425 Squadron based out of Yorkshire, England.

Lucky to be alive

In early March 1945, ice on the wings of the aircraft caused the heavy bomber to go down with a full payload of explosives outside the village of Little Ouseburn, England.

Of the six crewmen, Brownwell was one of three who survived, the other three died in the accident, including the pilot.

More than 70 years later and surrounded by his family, Brownwell is clearly grateful as he celebrates his 100th birthday, even if it is through a window.

The eldest of 16 children, Brownwell’s youngest brother Earl was able enjoy the moment beside him from inside the hospital.

Still, while he’s grateful for what he has, even in the midst of the pandemic, his daughter Tracy said these window visits are still no substitute for the real thing.

“I’m sure once the spring comes, we can have some more visits and hopefully get him home again.”