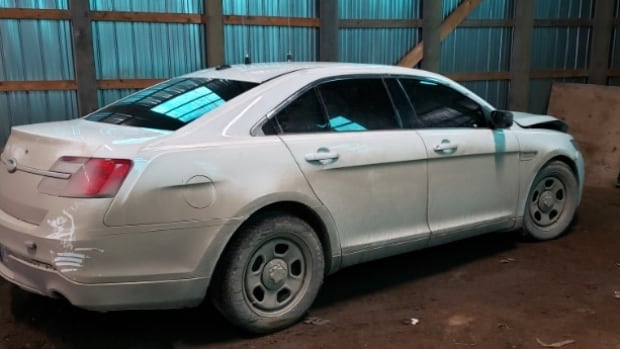 A 23-year-old man has been arrested for impersonating a police officer while driving a car made to look like a police vehicle, according to a news release from the Nova Scotia RCMP.

The Antigonish, N.S., man may have used the mock police vehicle to pull over other vehicles in both the Halifax Regional Municipality and Antigonish County, police said Wednesday.

The suspect was allegedly driving a white 2013 Ford Taurus with reflective striping along both sides, LED lights, a black push bar mounted to the grill, and a microphone attached to its dashboard.

Police found out about the man after people complained about someone driving what appeared to be an unmarked police car in both the HRM and Antigonish County. Officers tracked the man down to a home in Antigonish where he was arrested. They also seized a vehicle that matched witness descriptions.

RCMP spokesperson Cpl. Mark Skinner said when police seized the car, the reflective striping on the side had been removed. The driver had also struck a deer before the seizure and the push bar was damaged, he said.

It doesn’t appear the suspect was trying to imitate any particular police force, he just wanted to be seen as an authority figure, said Skinner.

The suspect also did not have any clothing that resembled a police uniform.

Skinner said the man’s motivation remains a mystery, but the police investigation is continuing.

The 23-year-old was released on conditions and is expected back in court in March.

RCMP believe there may have been other unreported incidents where the vehicle was used to pull over cars between Halifax and Antigonish. They want anyone who has seen the fake police car or know of any incidents involving it to contact them at 902-863-6500.