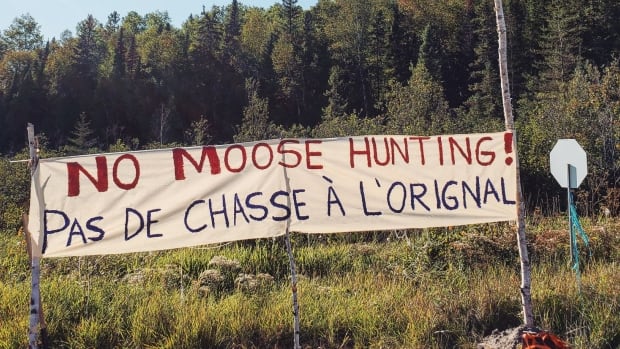 Members of the Algonquins of Barriere Lake have been turning away hunters at a growing number of checkpoints throughout Quebec’s La Vérendrye Wildlife Reserve as the First Nation continues to enforce its own moratorium on moose hunting.

It’s opposed to the moose hunting season, which started Sept. 14. Barriere Lake councillor Charles Ratt said at times, tensions have been high with some of the sports hunters trying to enter.

He said one man threw a moose leg at community members over the weekend when confronted, and last week, APTN captured video of a truck driver driving into someone at one of the checkpoints.

“There’s always going to be sports hunters who don’t understand or are not conservationists themselves but we tell them, as a sports hunter, it is a privilege for them to be here. For us, it’s our right.”

An aerial survey of the moose population earlier this year showed a “slightly lower” population density, which Quebec’s ministry of forests, wildlife and parks (MFFP) did not deem critical. Sépaq, the provincial government agency that manages the wildlife reserve located about 300 kilometres northwest of Montreal, reduced sports hunting permits for the 2020 season.

Barriere Lake leadership have been calling for a complete moratorium on sports hunting to address the decline in the moose population.

Kitigan Zibi Anishinabeg echoed Barriere Lake’s call for an immediate moratorium on moose hunting in an open letter to the provincial government.

“Our members will continue to peacefully protest and demonstrate for immediate action for the weeks, months, and years to come to protect our inherent rights and our moose population,” said Chief Dylan Whiteduck.

Shady Hafez is one of the Kitigan Zibi members showing their support at the checkpoint camps set up along junctions off Highway 117. The number of checkpoints has increased to six from four over the course of the week.

“We have to be out there to ensure that the moose population in the park can recover,” he said.

Kitigan Zibi is located south of the La Vérendrye Wildlife Reserve but Hafez said the checkpoint he’s been at is 15 kilometres from his family’s trap line.

“We still occupy and use that territory on a regular basis, and are deeply connected to that space. It’s home to us, just as much as KZ is home to us.”

The Assembly of First Nations Quebec-Labrador (AFNQL) said it also supports the call for a moose hunting moratorium, and wants to see the provincial government negotiate a solution with community leaders.

“It is time to listen to what our people have to say to protect the resource,” said AFN Regional Chief Ghislain Picard in a statement.

“We need to work together to develop an approach that respects the principles of consultation, accommodation, and free and informed consent. These are obligations, not options.”

Calls for Quebec to intervene

The Quebec Federation of Hunters and Fishermen meanwhile said it is worried about the request for a moratorium on moose hunting in the wildlife reserve, and is calling for the government to intervene to remove the roadblocks that contravene Quebec’s conservation and development of wildlife law.

“It is not justified to block access to hunters since the number of moose per 10 km² was evaluated at the start of the year and was not considered critical,” the federation said in a statement released last week.

Quebec’s ministry of forests, wildlife and parks said it is doing everything in its power to ensure the safety of hunters and citizens on the ground, and that it is sensitive to the concerns expressed by Algonquin leadership.

“In order to establish a concerted action plan related to the management of the moose population, it is essential that all stakeholders return to the negotiating table,” a statement to CBC News read.

Simon Boivin, spokesperson for Sépaq, echoed similar sentiments. He said the organization takes the conservation and protection of the moose population seriously.

“Sépaq calls once again for the negotiations to take place around a table instead of through barricades, and for those who bought their hunting rights within all the rules to be allowed to go sports hunting in the Réserve faunique La Vérendrye,” he said.

Community members spending their days and nights at the checkpoints say the whole situation could have been avoided.

“Quebec created this situation. We sounded the alarm three years ago about the decline, and at meetings we have been bringing it up that the population is low. Every time, those warnings were ignored,” said Barriere Lake member Christal Ratt, who has been at one of the camps since the beginning of the moratorium enforcement.

“Hunters think we’re interfering with their hunting season but Quebec knew this was coming, and now the blame and negativity falls on our people while we’re just trying to protect the moose.”