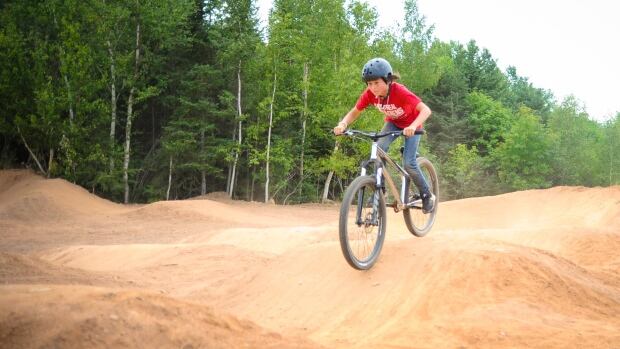 A London, Ont., cycling advocate says a year into the coronavirus crisis, he’s seen a sudden surge of renewed interest in the idea building a pump track in the city.

A pump track is a bike circuit that features a series of small hills called rollers and pitched and inclined sections where riders pump their bodies on down slopes of the track in order to achieve momentum.

While London doesn’t have one, it seems almost every other city in Canada does, from big to medium cities, such as Vancouver and Kitchener to smaller communities, such as Stratford and Tillsonburg, Ont.

Brandon Cassell wanted to change that in January 2020 by starting a petition to build one, but the arrival of the coronavirus in February and March put a chill on interest in the project, until this month.

Cassell said he thinks the renewed groundswell of support comes from a combination of factors, including the closure of the River Road Golf Course last month.

“I started getting tonnes of messages of support,” he said. “I think that reinforces it, a year later there’s that much more interest and that much more new people.”

Cassell said the interest doesn’t just come from within the city, but many of the smaller communities in the region. He said he and his children are among a large number of people who are willing to drive.

He said he often drives his own kids to the pump track in Uxbridge, northeast of Toronto, where dozens of people use the course and not just on bikes.

“I’ve seen everything from mountain bikes to BMX, to scooters, to inline skates and even seen some daring folks on wheelchairs.”

He said the cost of such a course would be 75 per cent of the cost of a concrete skate park and, if it happens, Cassell said he would like to see it connected to the city’s Thames Valley Parkway.

The only problem, he said, is trying to figure out where to put it. Like skate parks, pump tracks tend to attract youth, which isn’t a big selling point for some homeowners.

“That’s the most difficult part.”

“A lot of neighbourhoods are not that embracing in bringing in a lot of youth into a neighbourhood. I think there are a lot of misconceptions.”