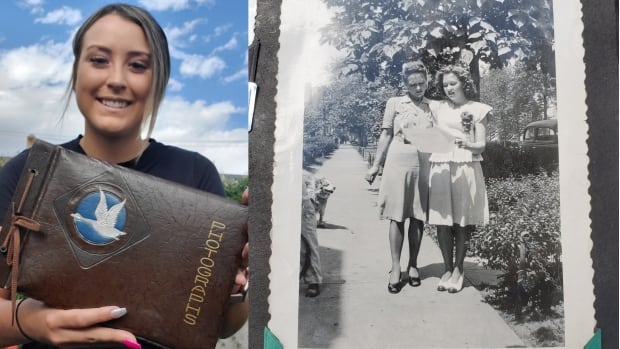 Kaylee Stoddart was walking her dogs in a gravel pit near the Thompson River in the southern Interior city of Kamloops, B.C., when they came across a pile of what looked like garbage.

One item stood out, though: A leather bound album wrapped in lace with the word “Photographs” printed on the front.

Inside, Stoddart found a series of black-and-white family pictures taken from 1947 to 1952.

“Someone took the time to write the names, the years and everything in there,” she said. “You can see the kids grow up, there’s school pictures, there’s bible camps, there’s houses that were built, family pets… I feel like I know this family.”

Her best clue was a name indicating the person responsible for curating the photos: “Miss Joyce Mallett of Dawson Creek, B.C.,” who had also included a note asking “Please don’t take any of my pictures.”

But Facebook messages to every Mallett she could find in the Dawson Creek area of northeastern B.C. went unanswered, so she turned to the radio for help, appearing on CBC morning programs in B.C.’s interior and north.

“I just want a happy ending,” she said. “Somebody has to be missing this.”

Album stolen from a suitcase

That somebody turned out to be Patricia Urchit, whose late sister had put together the album before dying at the age of 23 in 1958 — just eleven years after she started the album.

Urchit  wasn’t listening to the radio when the interview aired, but several family friends were and they contacted her right away.

“The pictures are very precious,” she said. “I am so thankful.”

Urchit explained she had the album stored in a suitcase that had been stolen from her home in Kamloops recently, after she and her husband moved into a senior’s community.

Due to COVID-19 restrictions, Urchit hadn’t been able to return to the house to find out what was missing, and so she was unaware the album had been stolen until she heard it was recovered.

Stoddart said her family once had an entire trailer full of memories stolen — which is why it was so important to her to be sure the photos found their home.

“I’m almost in tears, actually,” she said. “I know how it feels to lose something as precious as that.”