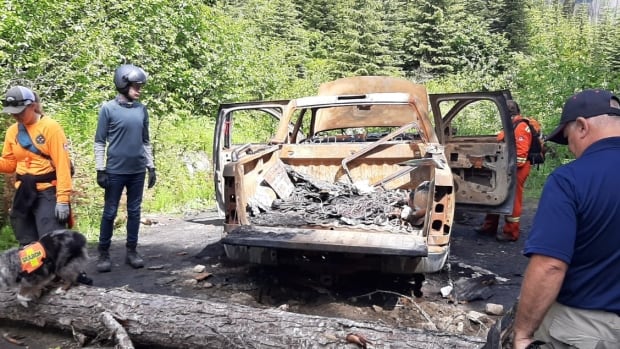 Part two of a two-part series. Read part one here.

Paige Fogen says she can’t help but wonder if the unexplained disappearance of her brother is somehow connected to the cases of other men who have gone missing in B.C.’s southern Interior.

Marshal Iwaasa vanished without a trace last November. His burned-out truck was found on a remote forest service road near D’Arcy, B.C., about 150 kilometres northeast of Vancouver. To date, police and private investigators haven’t found any clues about what happened to him, or evidence to prove he’s dead or alive.

In the two years before Iwaasa disappeared, at least five other cases of men going missing were linked to the same region of southwestern B.C. Some of those cases share details similar to Iwaasa’s.

Two of the missing men were eventually found dead. None of the cases have been solved.

The RCMP says there is no “investigational correlation” between any of the files, but Fogen can’t help but wonder.

Fogen is not the first to be struck by the parallels.

Last year the family of another missing man also raised questions about possible links in the cases.

Luke Neville vanished without a trace near his home of Spences Bridge, located about 140 kilometres north of Hope on Highway 1,  in Oct. 2017. His burned-out van was found on a forest service road 20 kilometres out of town the next day.

“I keep hoping every day that the police would call and say we’re starting to connect all the dots,” brother Mark Neville told CBC in 2019.

“But no, I haven’t heard anything from the police about if there’s any commonality between the cases. But I feel that there is — that’s just my gut.”

Iwaasa’s torched GMC pickup truck was found by hikers on a remote forest service road near D’Arcy B.C., Nov. 23, 2019. His last known location was visiting a storage locker in his hometown of Lethbridge, one week earlier. Lethbridge Police are leading the investigation and say there is no evidence of criminality in the case.

The two Surrey men were last seen alive in a 2019 white Jeep Cherokee which was found four days later, abandoned in a wooded area near Logan Lake, located between Kamloops and Merritt. One month later, their bodies were found in a rural area north of Spences Bridge, 80 kilometres away. The RCMP has said there was “criminal behaviour” associated with the case, but no further details or cause of death have been made public.

Tyner, a working cowboy, vanished from the Merritt area after riding into the hills to look for cattle. His abandoned horse was found fully saddled on a forest service road northwest of the city two days later. An extensive search by volunteers and police on foot, horseback, in helicopters and on snowmobiles, found no trace.

The 20-year-old disappeared after leaving a house party at the Sun Peaks Ski Resort outside of Kamloops. RCMP and hundreds of volunteers have searched extensively through the village and its surrounding trails, forests and mountains, but few clues have ever emerged as to what happened to him.

Neville’s burned-out white van was found on a forest service road 20 kilometres from his home in Spences Bridge. A cadaver dog search of the area in June 2018 turned up nothing. Last year the Neville family erected a billboard on the Trans Canada Highway in Spences Bridge, asking anyone with information to come forward. Police say they consider the disappearance suspicious. Brother Mark Neville says the family has not been informed of any developments in the case. “No leads, no suspect, no news,” he said. “It’s all in the police’s hands and up to them.”

According to an RCMP spokesman, all the cases remain open in each of their police jurisdictions.

“The investigators in these matters are familiar with other ongoing investigations,” said Cpl. Christopher Manseau. “The only thing noted to be in common is that the missing persons or victims are male, and their geographic location.”