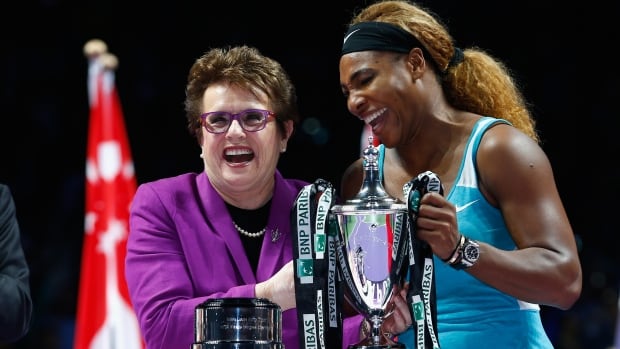 This is an excerpt from The Buzzer, which is CBC Sports’ daily email newsletter. Stay up to speed on what’s happening in sports by subscribing here.

On Sept. 23, 1970, Billie Jean King and eight other women’s professional tennis players joined with promoter Gladys Heldman to officially launch their own tour. Tired of unequal pay and unequal treatment from the sport’s male-dominated establishment, the players signed $1 contracts to compete in a series of events organized by Heldman. Their rebellion was brilliantly publicized with the now-famous photo of the “Original 9” holding up $1 bills. It was taken exactly 50 years ago today in Houston, where the tour’s first tournament was played.

Righteous (and correct) as it seems five decades later, this took a lot of guts. Tennis officials tried to intimidate the women and threatened to ban them from Grand Slam tournaments. Many fellow players were opposed to the breakaway and refused to support the new tour right away. So even though the nine renegades felt they had nothing to lose (tournaments back then paid women a fraction of the prize money offered to men), they were putting their careers and reputations on the line. All for the hope that one day (maybe not until after they were gone) things would get better.

The Original 9’s push for equality in pro tennis coincided with an emerging women’s liberation movement, and it struck a chord with the public. Perhaps sensing an opportunity to capitalize on it (this is America, after all), the Philip Morris tobacco company agreed to sponsor the fledgling tour. It was named the Virginia Slims circuit after a brand of cigarette marketed toward women. Problematic by today’s standards, sure, but the tobacco money allowed the tour to survive in those critical early days. Once it became clear it was here to stay, more players hopped aboard.

King gave women’s tennis another shot in the arm in 1973 when she faced 55-year-old ex-tennis-pro-turned-gambler/hustler Bobby Riggs in the Battle of the Sexes at the Houston Astrodome. King beat him in front of more than 30,000 fans and an estimated TV audience of 50 million in the U.S. alone.

A less dramatic, though perhaps more important, moment occurred a few months earlier when King and the rest of the Original 9 formed the Women’s Tennis Association. The WTA became (and still is) the world governing body for women’s tennis and includes some 2,500 players. Its top stars are unimaginably rich. Naomi Osaka and Serena Williams were the two highest-paid female athletes in the world last year, according to Forbes, raking in an estimated $37.4 million and $36 million US, respectively, in prize money and endorsements.

But King and the Original 9’s core issue was equal pay. So on today’s 50-year anniversary, perhaps it’s more relevant to ask how tennis is doing on that front.

The short answer is that it’s come a very long way. Back in 1970, some tournaments paid women an eighth or even a tenth of what the men made. Today, each of the four Grand Slam events offers equal prize money. Same for the recently rebranded Billie Jean King Cup (formerly the Fed Cup), which pays out the same as the men’s Davis Cup. There’s even a big-time women’s event with a higher purse than its men’s equivalent. Thanks to a deep-pocketed title sponsor, the winner of last year’s WTA Finals, Ash Barty, walked away with $4.42 million US. That’s the biggest cash prize in tennis history and about $1.76 million more than Stefanos Tsitsipas got for winning the ATP Finals.

But if you look deeper, it gets a little more complicated. Remember the semi-controversy that occurred in 2019 when Bianca Andreescu won the women’s Rogers Cup in Toronto and got paid “only” $521,530 — half as much as Rafael Nadal made for winning the men’s Rogers Cup in Montreal? That pay gap is not as outrageous as you might think at first glance, but it’s also an example of how tennis still doesn’t treat women quite equally — no matter what story the sport likes to tell about itself.

Let’s tackle the reason for that Rogers Cup pay gap first. Some people assumed that the difference between Andreescu’s and Nadal’s cheques was due to men’s tournaments typically commanding more money from sponsors and TV rights holders. But that wasn’t it.

Regardless of any revenue gap, tennis has decided that tour stops featuring both a men’s and women’s tournament of equal importance in terms of rankings points should offer equal prize money. But this doesn’t apply to the Rogers Cup. Despite the two tournaments being played at the same time under the same name, their respective tours place different values on them. The men’s Rogers Cup is classified as a “Masters 1,000” event by the ATP Tour. That means the winner gets 1,000 rankings points, which is the most you can get outside of a Grand Slam or a year-end Finals. The women’s Rogers Cup is one of the WTA Tour’s “Premier 5” events. These are worth 900 points to the winner. As you might guess, fewer rankings points means less prize money.

The Rogers Cup isn’t the only tour stop like this. There was even one in China last year where the women’s event was more valuable than the men’s. So it’s fairly common in tennis to have a man and a woman make different money for winning events held at the same time under the same name.

Not the best look, but that shouldn’t be the biggest concern when it comes to equality in tennis. The real issue is that the men have a lot more of those 1,000-point events (and the bigger purses that come with them). Since the 2020 season has been ravaged by the pandemic, let’s go back to 2019. The men had nine Masters tournaments, compared to only four Premier Mandatory, which are what the women’s 1,000-point tournaments are called. The WTA Tour sort of made up the difference with its five Premier 5 events, but they don’t quite do the trick. Remember, those are 900-point events. So the prize money is typically less.

Until the women’s tour offers the same number of 1,000-point events as the men get (with the accompanying prize money), it’s hard to say the sport has achieved full pay equality — and finished the work started by Billie Jean King and the Original 9.