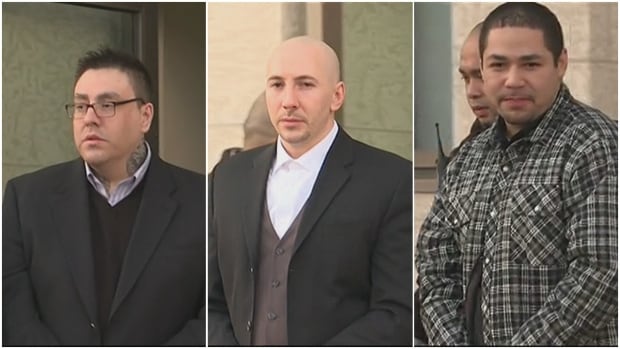 Three Regina men convicted of first-degree murder in the 2015 killing of Reno Lee have lost an appeal to have their convictions overturned.

Andrew Bellegarde, Daniel Theodore and Bronson Gordon all received life sentences, with no parole eligibility for 25 years, in 2018 for the shooting and dismemberment of Reno Lee.

Lee was shot twice in the head at a home in Regina’s North Central neighbourhood in April 2015. Bellegarde and Theodore dismembered Lee’s body, and his remains were buried in a shallow grave on the Star Blanket First Nation.

During the appeal, Daniel Theodore’s lawyer argued his client’s right to a fair trial was violated by the impact of racial bias because the trial judge, Justice Catherine Dawson, did not question potential jurors on that matter.

The defence also argued Dawson failed to properly address the issue of racial bias, and that she did not provide adequate instructions to the jury about racial stereotypes, among other claims.

Theodore is not Indigenous but, according to the written decision, “he asserts that racism is so widespread and pervasive in Saskatchewan that there existed an ‘air of reality’ that jurors would be biased against his co-accused because they are Indigenous.”

In a 59-page decision signed by Tholl and Leurer, Kalmakoff wrote that he is not persuaded that there were any irregularities in the trial as claimed by Theodore, and that the appeal did not demonstrate a violation of Theodore’s rights.

A lawyer for Andrew Bellegarde argued that the trial judge erred by permitting a key Crown witness to testify remotely.

Bellegarde argued that “the ability to see and confront an accuser is vital to enabling the defence to effectively conduct cross-examination,” Kalmakoff wrote in the decision.

“Second, he says, the personal presence of witnesses is of particular importance in a jury trial, where the ability to observe demeanour is crucial to the credibility assessments jurors must make.”

Bellegarde’s lawyer also argued that the trial judge’s instructions to the jury were inadequate in several ways.

But the appeal justices concluded that the judge had acted appropriately in both regards.

“The question to be asked on appellate review is whether the court is satisfied that the jurors adequately understood the issues involved, the law relating to the charges the accused were facing and the evidence they should consider in resolving those issues,” Kalmakoff wrote.

“In this case, I am satisfied the answer to that question is ‘yes.'”

Bronson Gordon’s case for an appeal also took aim at the trial judge’s final instructions to the jury.

His lawyer argued that the trial judge did not adequately relay the evidence, that she was unbalanced and erroneous with respect to mobile phone metadata evidence, and that the judge did not properly instruct the jury that they could find Gordon guilty of manslaughter rather than first-degree murder.

“Based on the instructions given by the trial judge, if the jurors were not satisfied that Mr. Gordon was involved in anything beyond the unlawful confinement of Mr. Lee, they were required to acquit him outright,” writes Kalmakoff.

“If there was an error on the part of the trial judge, it was that she failed to instruct the jury that it could find Mr. Gordon guilty of first-degree murder.… That error, if anything, worked to Mr. Gordon’s benefit.”