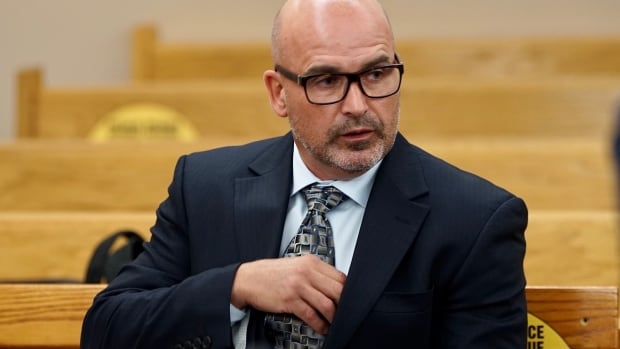 Throughout a trial that heard from over a dozen witnesses, two distinct portraits of the accused former principal at the centre of it have emerged, as testimony concluded in a St. John’s courtroom Wednesday.

One of those showed Robin McGrath, the former principal of a Conception Bay South elementary school charged with assault against four of his students, as a caring leader who took great pride in his job.

He was the type of principal to personally pay a visit to every class each morning, he testified Wednesday.

“I had it down to a science,” McGrath said.

“I feel strongly students should know who their principal is, and should have a relationship with them.”

That version of McGrath, who once won an educators’ award recognizing his dedication, portrayed his behaviour as jovial and, as one staff member testified, fatherly. According to multiple witnesses, he’d only ever been seen speaking sternly to students.

Some of that testimony suggested the very children he’d been accused of shouting at, grabbing, and stepping on showed no indication they feared him.

The other version of McGrath presented in court depicted a menacing authority figure prone to losing his temper in full view of multiple staff members: a principal accused of grabbing disabled children by the face or squeezing them in a bear hug until they cried, among other allegations.

McGrath is charged with four counts of assault, all involving minors with disabilities. He also faces one count of uttering threats. The trial has been ongoing since mid-August and after Wednesday is on break until Nov. 9.

Nothing in McGrath’s case is clear-cut, with testimony involving chipped shoulders and closed-door meetings among staff members in a workplace that one witness described as sullied by “systematic fear.”

In provincial court in St. John’s this week, McGrath himself repeated that he did no harm to the children in his care.

According to the principal, he went the extra mile in ensuring those most in need were served, and adopted the role of disciplinarian and referee, a job he said others had rejected.

At times, it meant helping one student use the bathroom. Water, either in a bucket or from a shower, often served as a distraction technique for that alleged special-needs victim, who often refused to use the bathroom, McGrath said.

The child would often make a game of splashing in the water or flicking it in the principal’s face, according to McGrath, who smiled as he said the words. He said the child’s mother was well aware of the extent of his involvement with the student, who he claimed required more assistance than any other at the school.

Staff frequently called him to assist when that student became unruly and violent, he said. He estimated, on average, at least two calls each day, which he said he encouraged.

He never once dragged him into the shower, he added.

He cared so much, McGrath said from the witness box, that he had once cupped another troubled student’s face in his hand, pleading him to reveal whether he’d been sexually abused. All the signs were there, he said.

“I begged him,” McGrath said, rejecting the claim that he grabbed, held or screamed at that child.

Crown prosecutor Shawn Patten cross-examined McGrath for under an hour Wednesday, focusing not on the allegations McGrath outright denied, but on the occasions where he said he did, in fact, lay hands on a student.

Patten suggested to McGrath that his own testimony showed he acted in ways that intended to frighten those students.

McGrath lifted chairs when shifting them, with the child sitting on it, as an intimidation tactic, Patten said. “I suggest you jolted it to give [the child] a scare,” he said.

No, McGrath replied, he simply wanted to bring them closer to speak to them, which required lifting the chair over his foot. “To do something to create panic would compromise what my intentions are,” he said.

Patten asked why he didn’t simply move his foot. McGrath was visibly confused by the question.

“I didn’t see anything wrong with that,” he said. “I don’t know how to answer you.”

“No sir, it’s not agitating … it’s [a teaching] opportunity.”

Patten grilled McGrath about touching students’ faces when their attention wandered. McGrath emphasized that he lightly touched their chins to direct their gaze back to him as they looked around.

“You want to put a bit of fear in them,” Patten said.

“Putting fear in kids with disabilities can give you a certain level of compliance, can’t it?” Patten asked.

The accused took frequent opportunities to explain his intentions, reinforcing the well-meaning, hard-working version of himself that some testimony had built over the course of the trial.

Patten, in his final words Wednesday, suggested McGrath enjoyed the challenge of handling special needs students — at times, allowing that to override other options available to him.

McGrath had described, on multiple occasions, lifting and taking by the arm a child that refused to leave his mother’s car in the morning. Patten asked McGrath if there was other recourse besides physical intervention.

“The [alternative], sir, I put to you, is the child leaving in the car with his mother because he wouldn’t go to school that day,” Patten said.

There is no further testimony planned when the trial resumes Nov. 9.