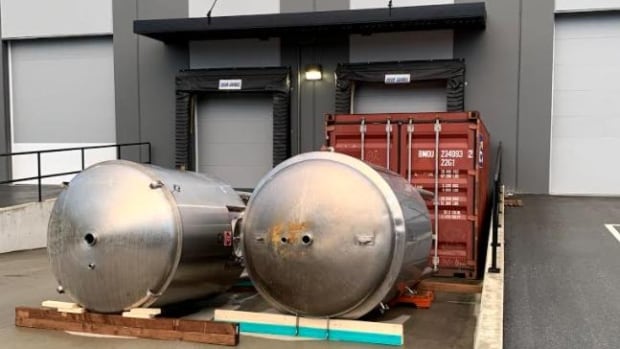 Two stolen fermentation tanks — worth more than $40,000 — have turned up at two different local scrapyards.

The massive tanks were removed from a Port Coquitlam brewery last weekend while it was under construction. The owner says publicity generated by the thefts allowed police to track the tanks to two separate yards. One was more damaged than the other.

“Extremely happy,” said Saxe. “It was very stressful. Obviously. Just hearing that we had one tank show up was quite surprising and quite shocking.”

The massive fermenting tanks worth more than $20,000 each vanished from the back lot of the brewery still under construction on Seaborne Avenue.

The owner discovered the theft Monday when he showed up to work and noticed the tanks were not parked in the loading bay.

Coquitlam RCMP Const. Deanna Law said the tanks will be returned and police are homing in on some suspects.

“It would have taken a flatbed truck and a crane to remove the fermenters and even a larger truck to remove both,” said Law.

To deter thefts, she urges all businesses to make sure valuables are stored safely and lighting in and around the business is bright enough to deter thefts.

Saxe is having the tanks stress-tested to see if they can be repaired and still used.

He said one was in good shape, but the second tank may not be salvageable and joked that a few people who had watched the popular television series Breaking Bad suspected the tanks were stolen to cook meth.

But that wasn’t the case. The real story was more mundane.

Somebody just tried to sell them for the price of the metal, melted down.

Saxe is thrilled it didn’t happen — and now says he’s brainstorming ways to use the caper to market his new brew and hopes insurance will cover the cost of getting his brewery back on track.